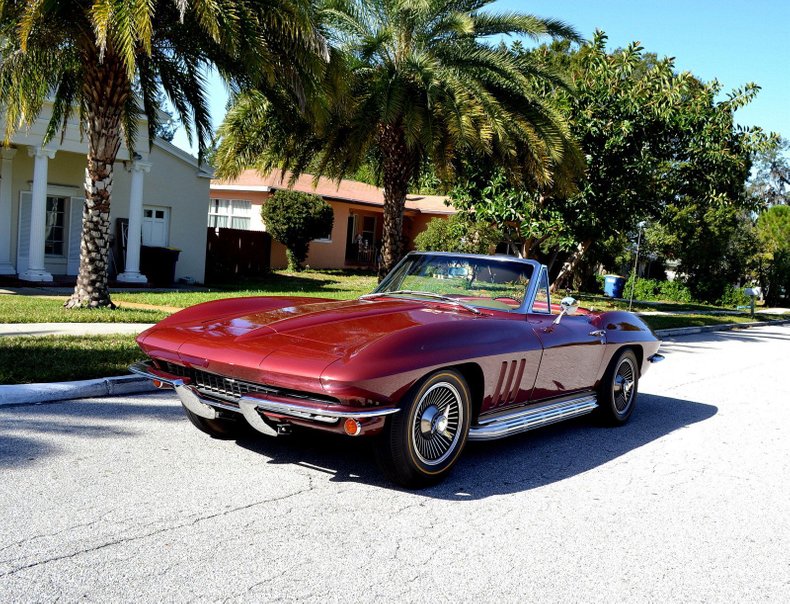 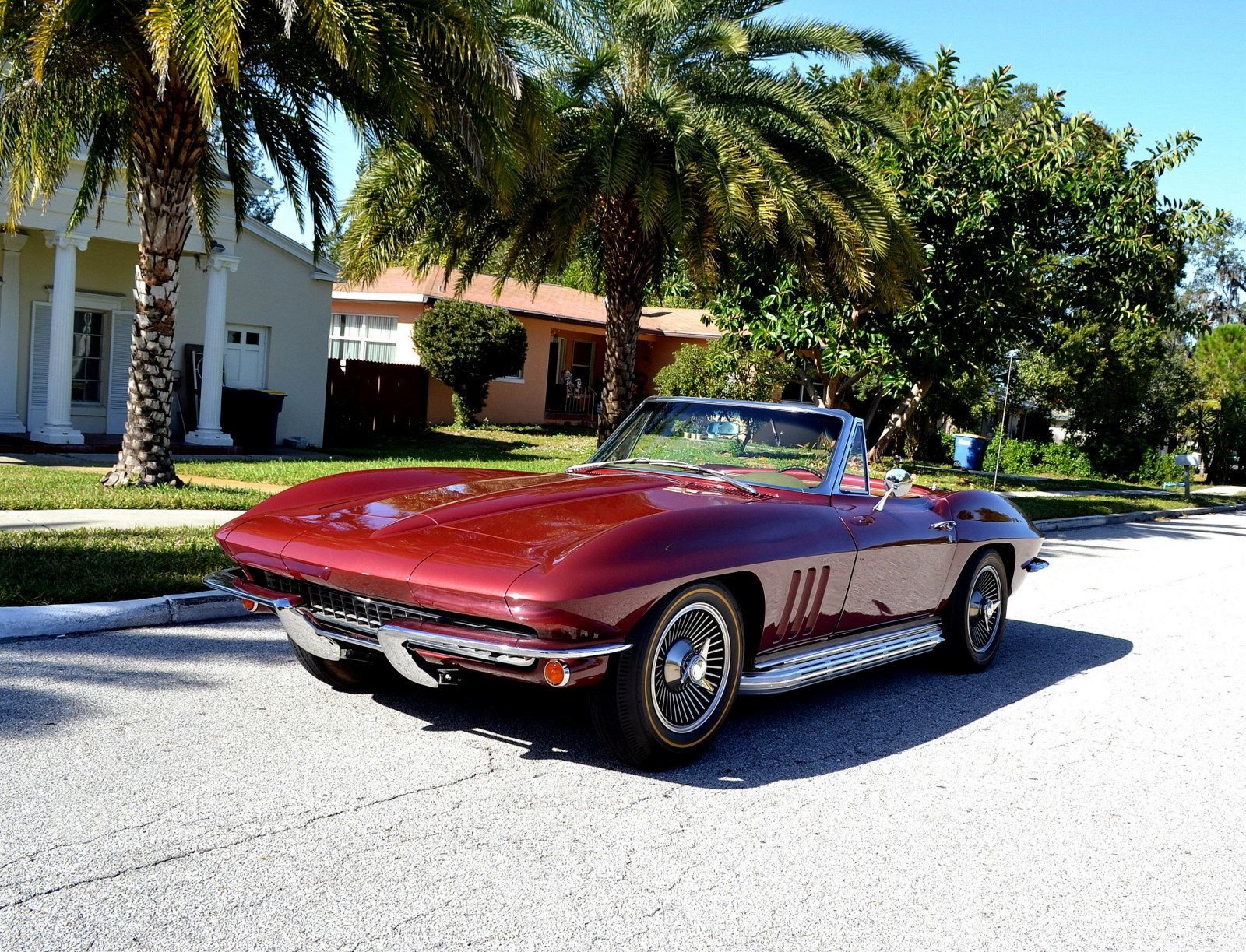 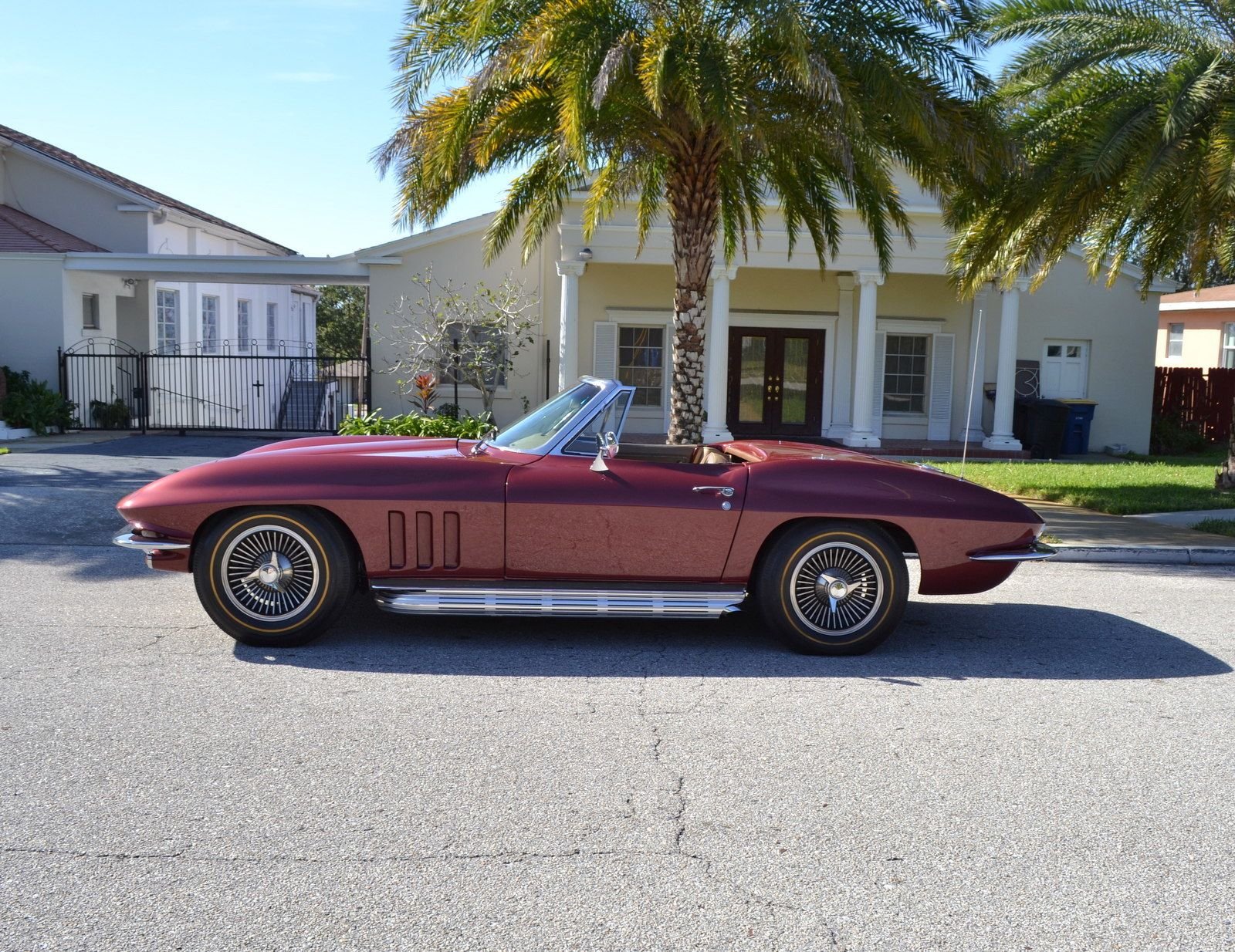 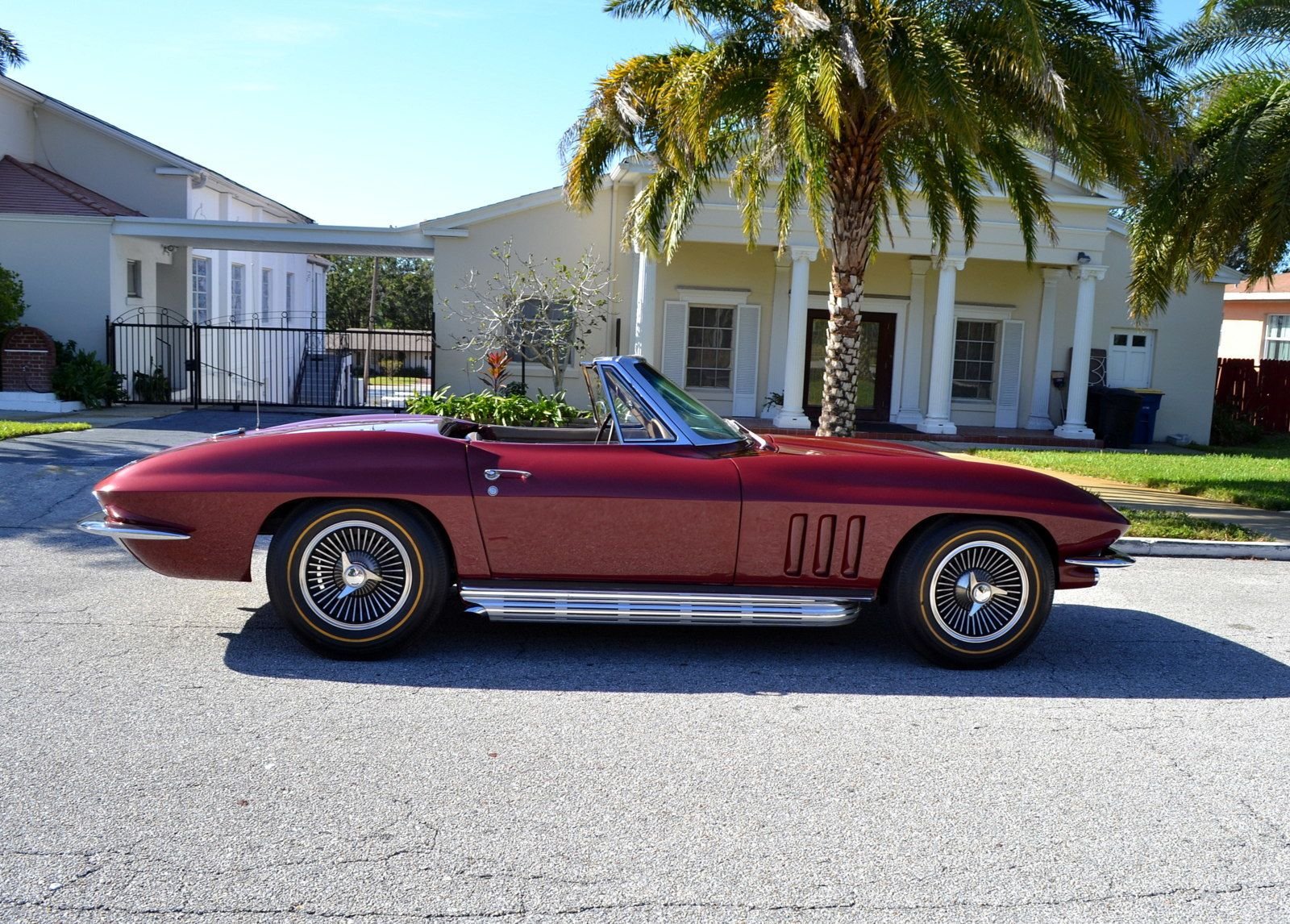 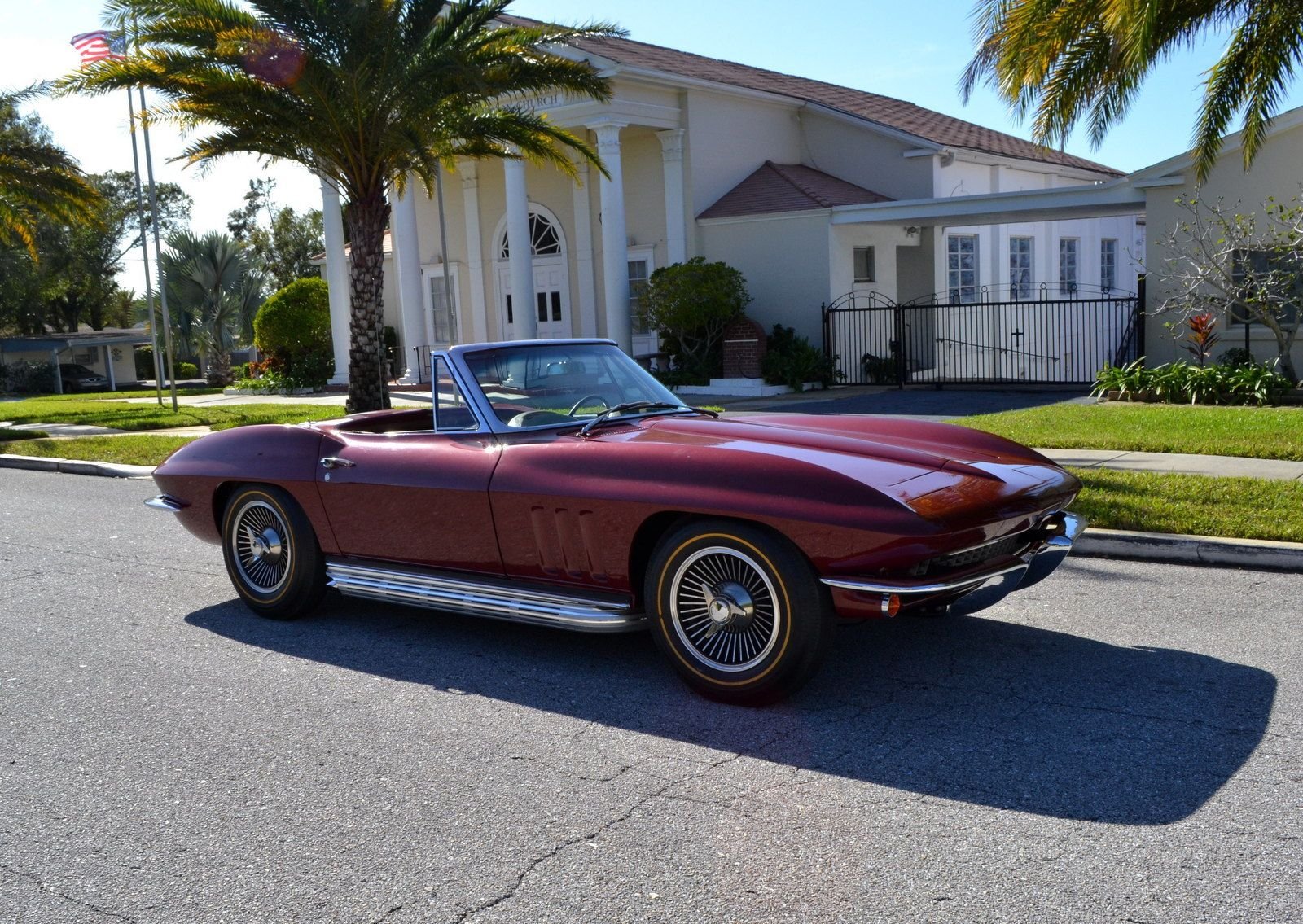 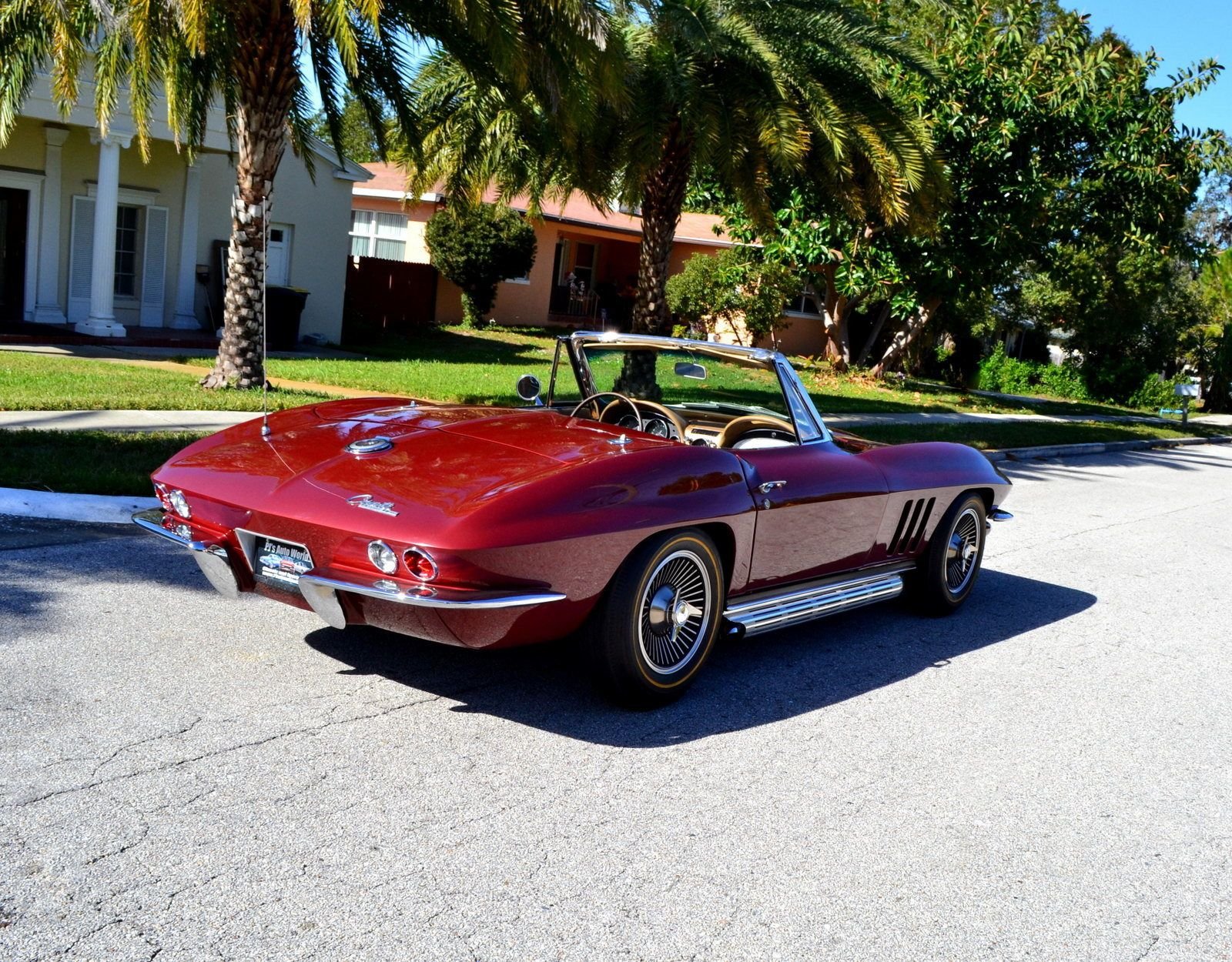 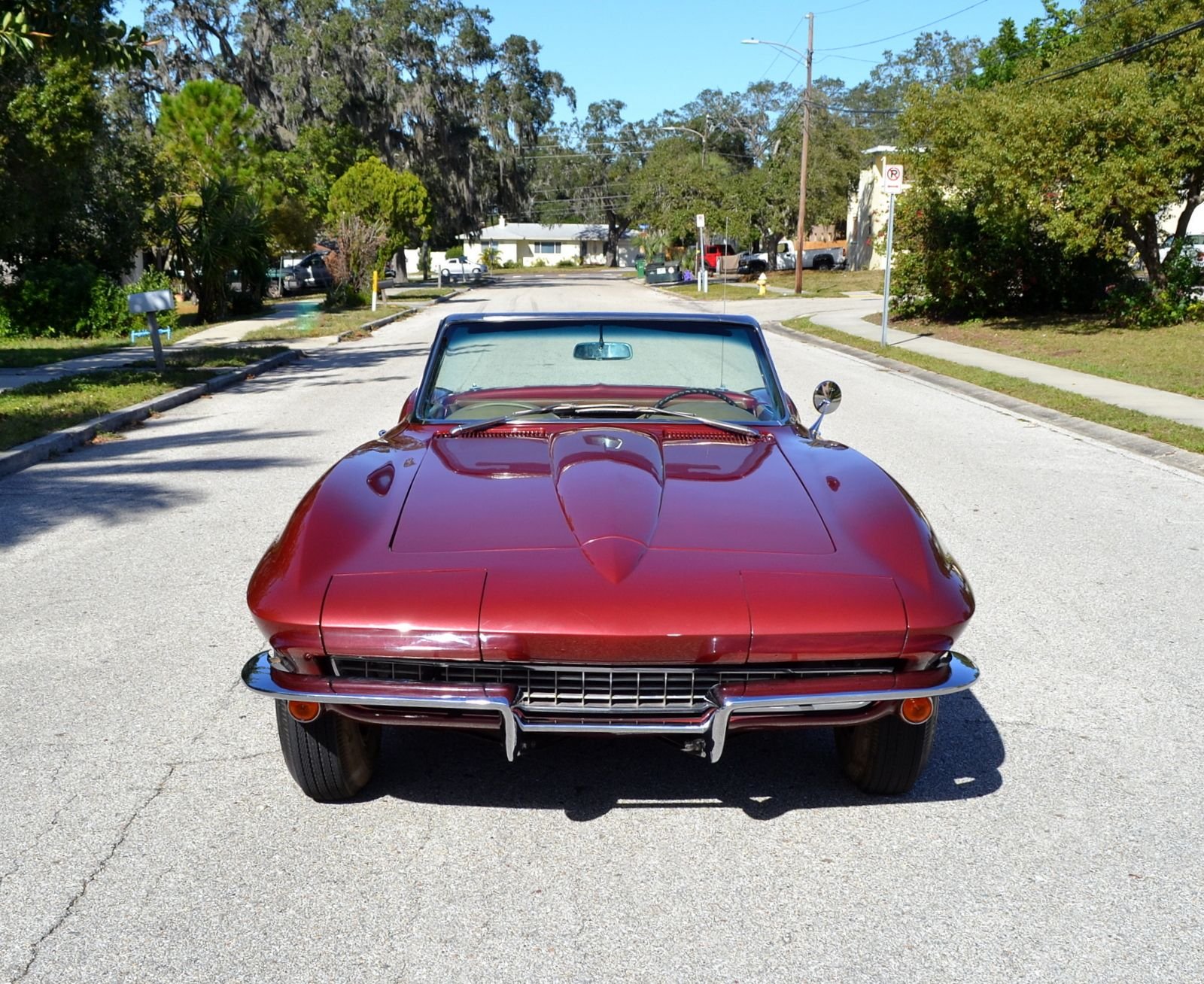 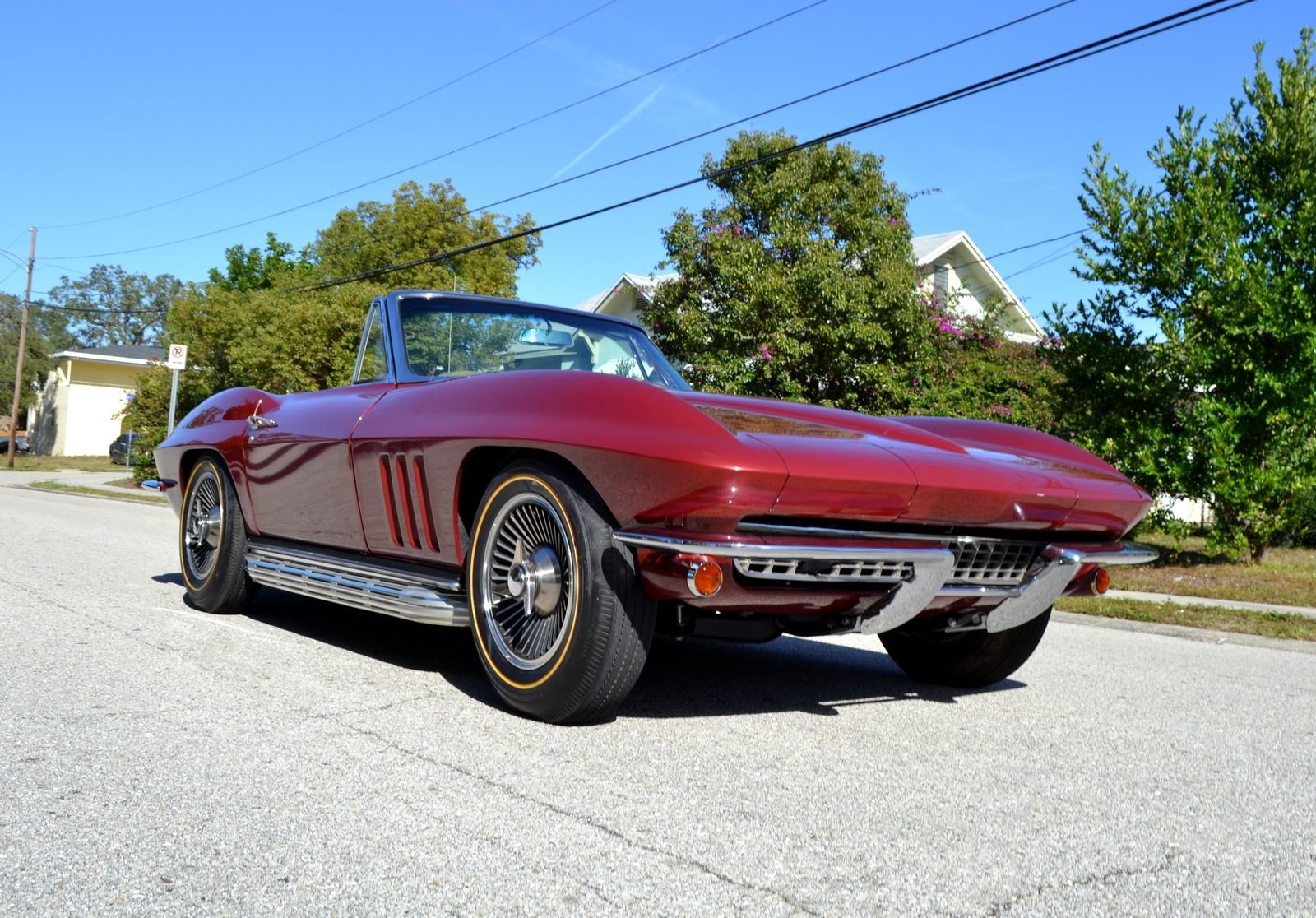 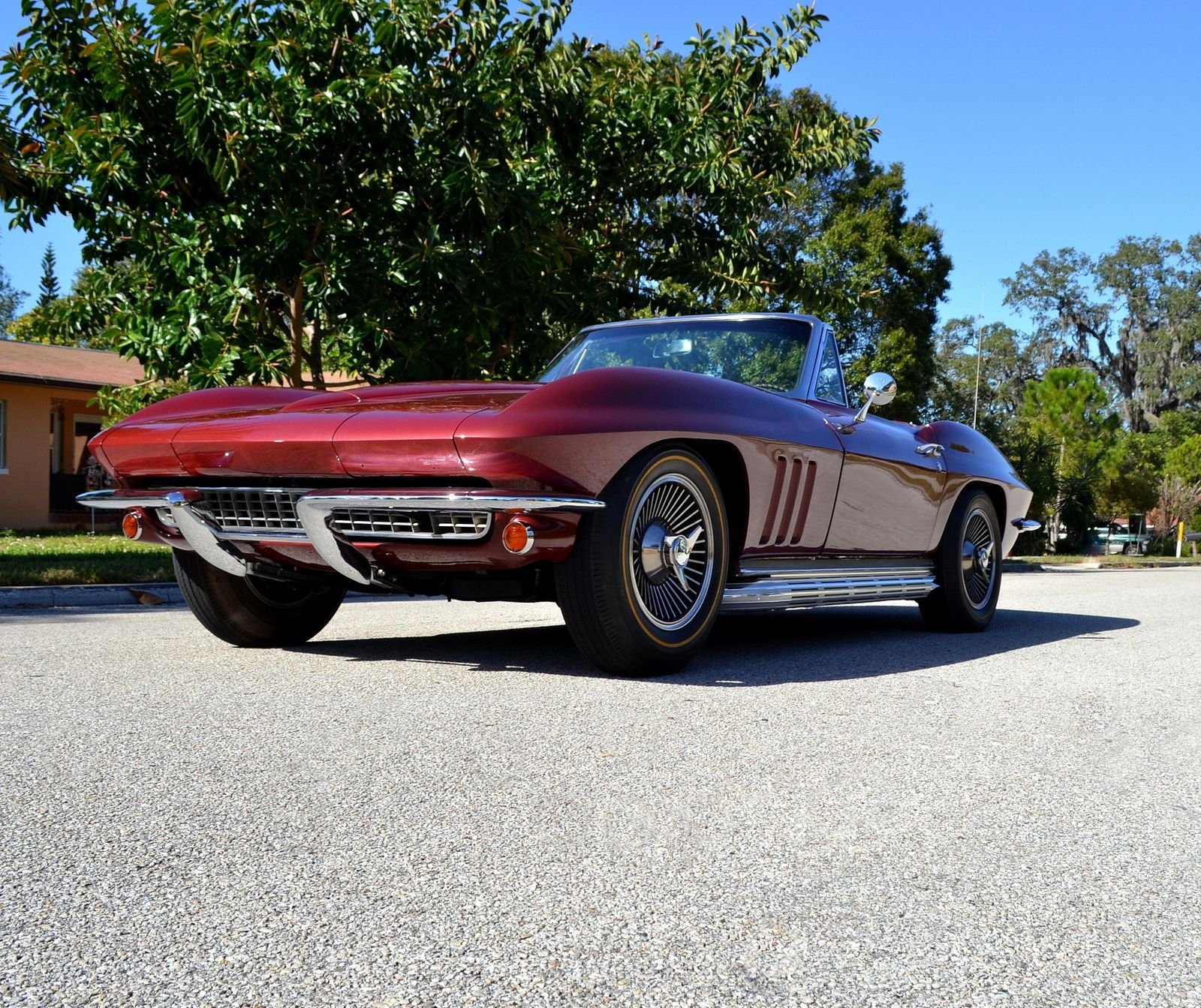 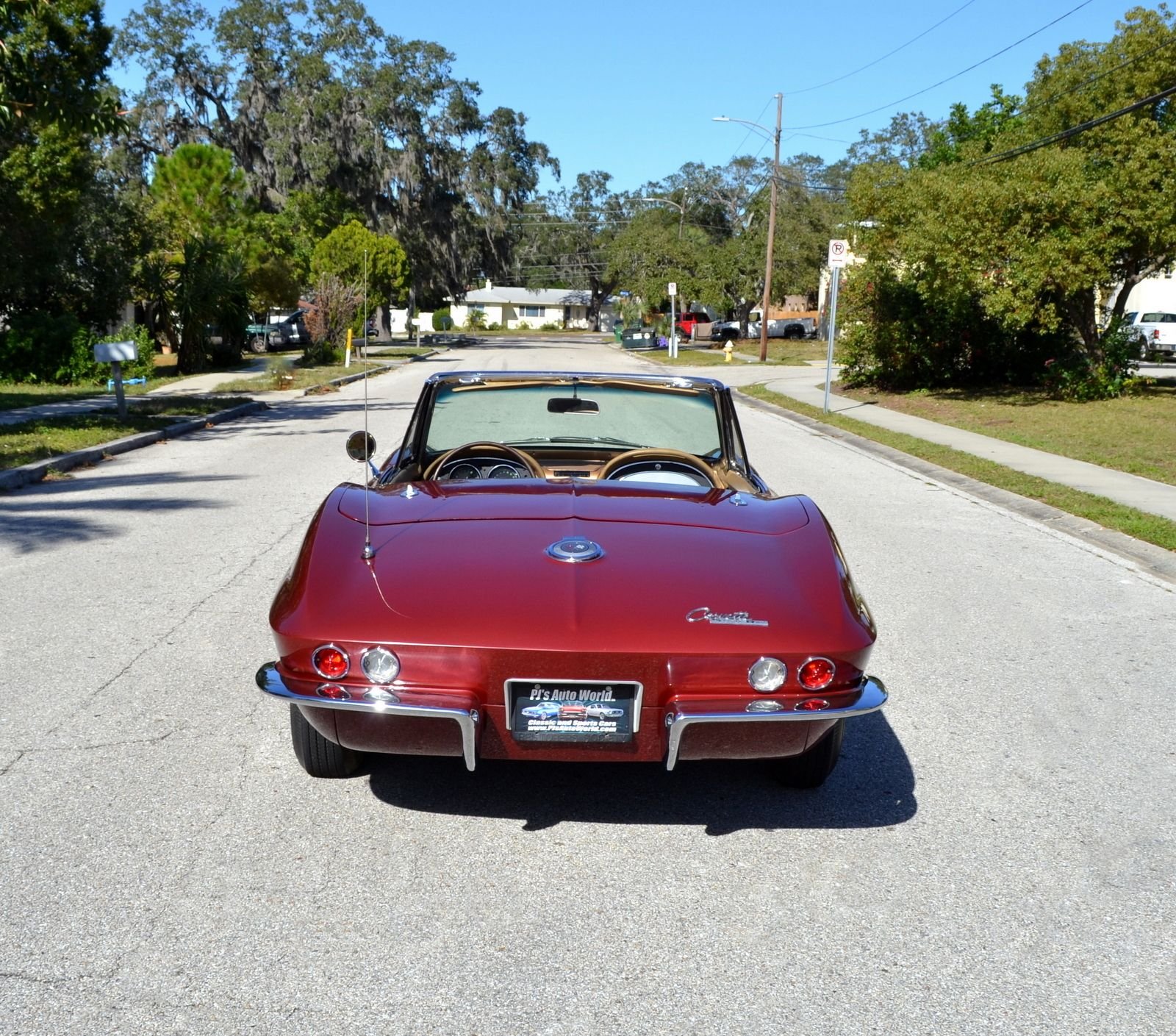 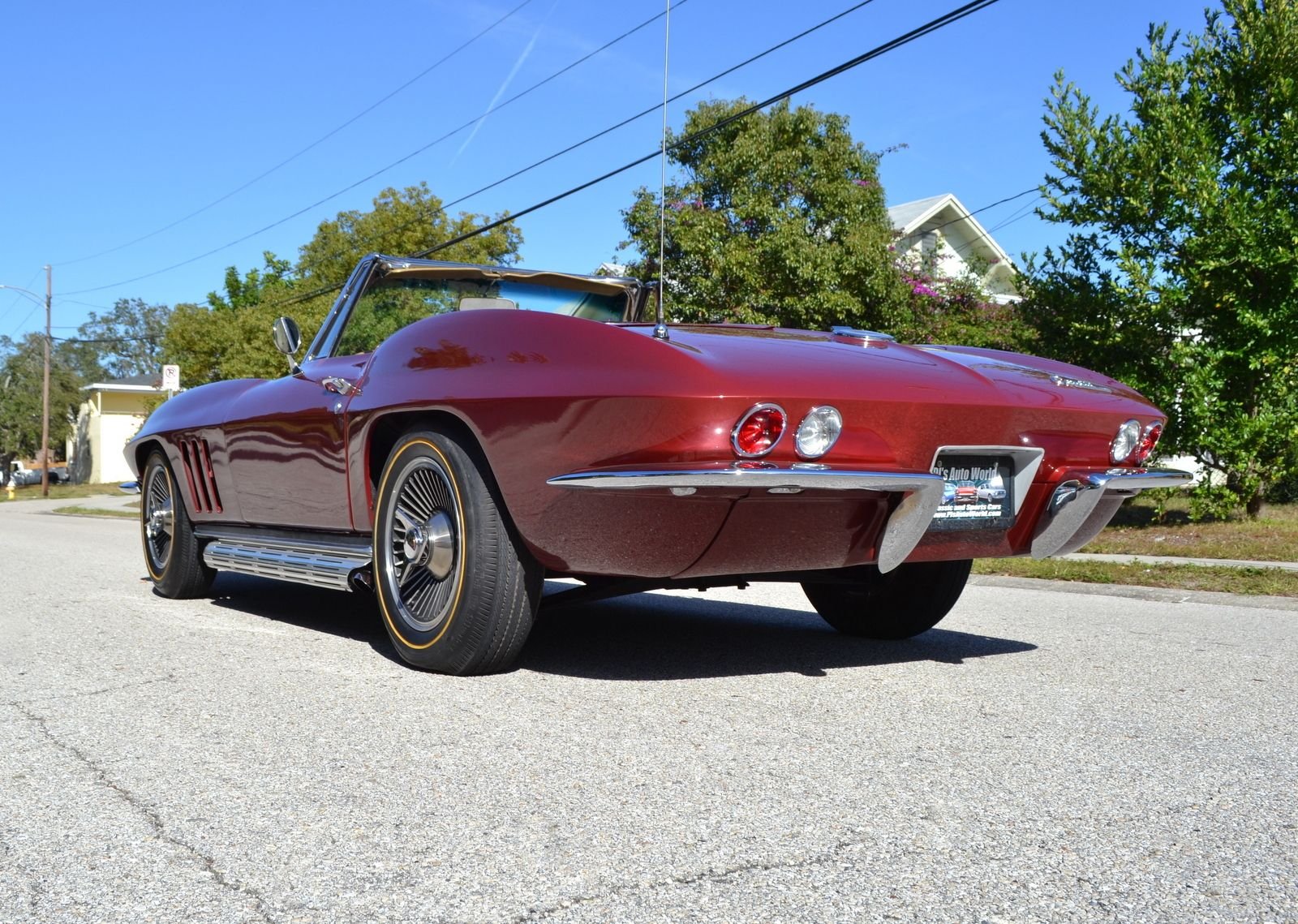 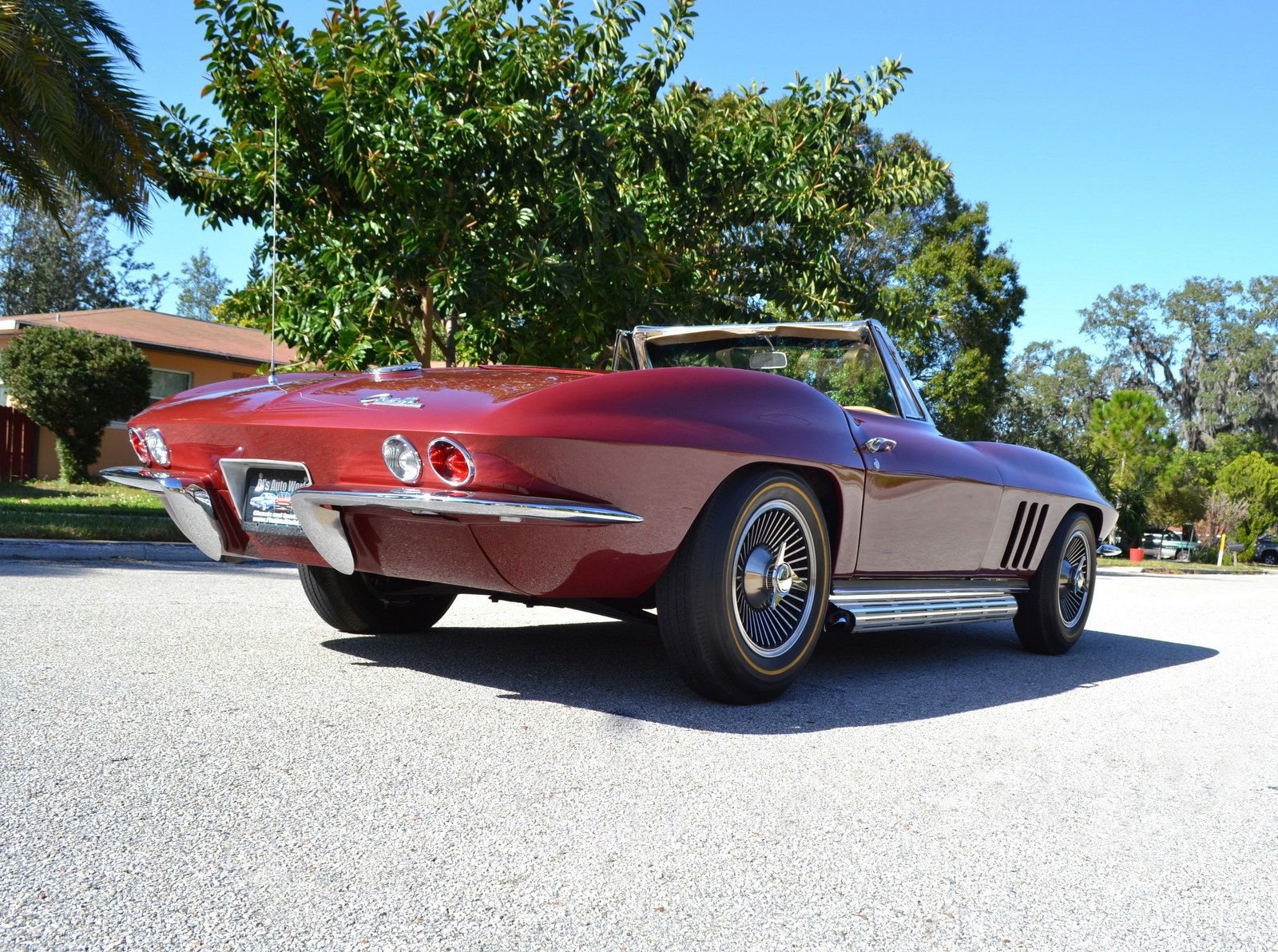 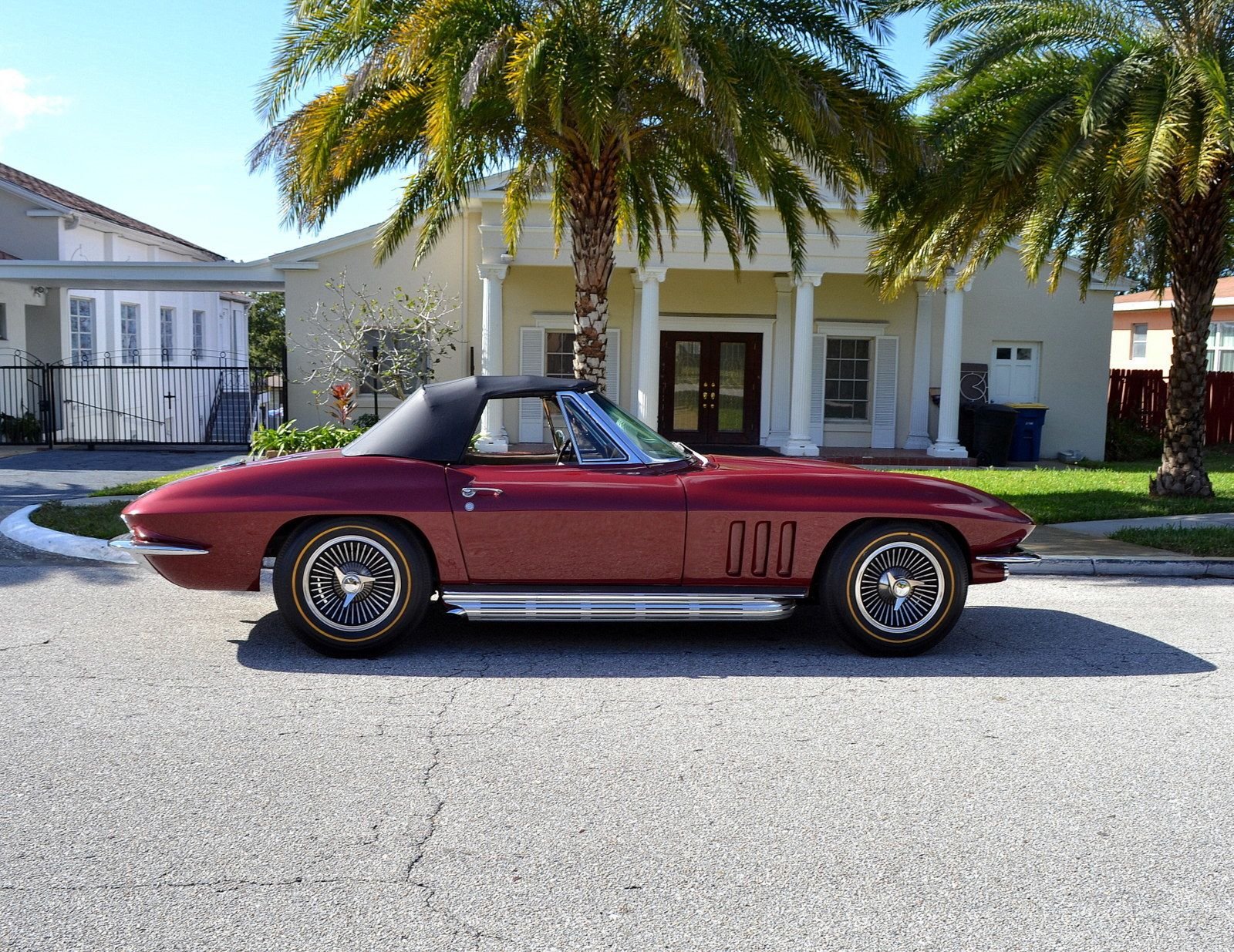 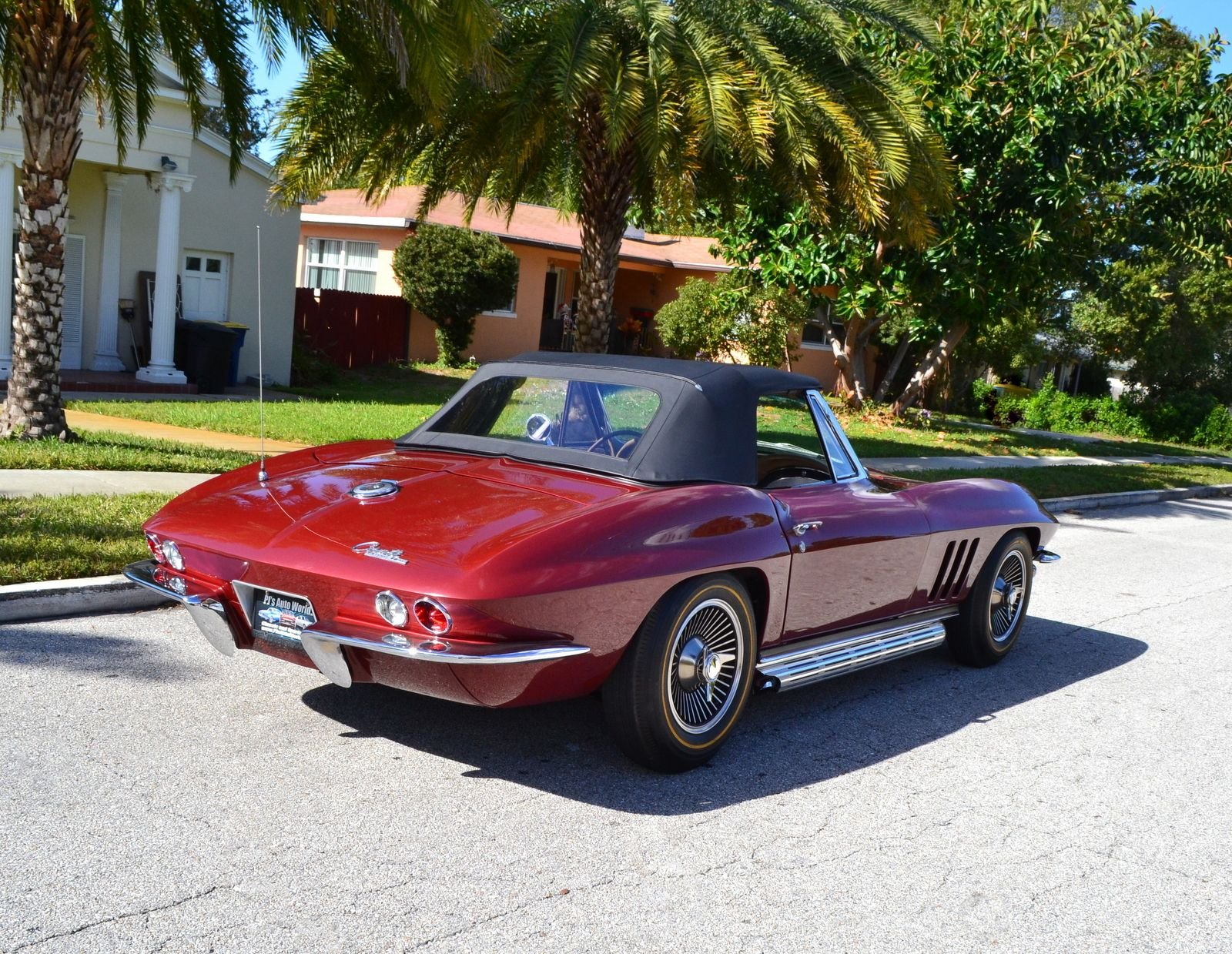 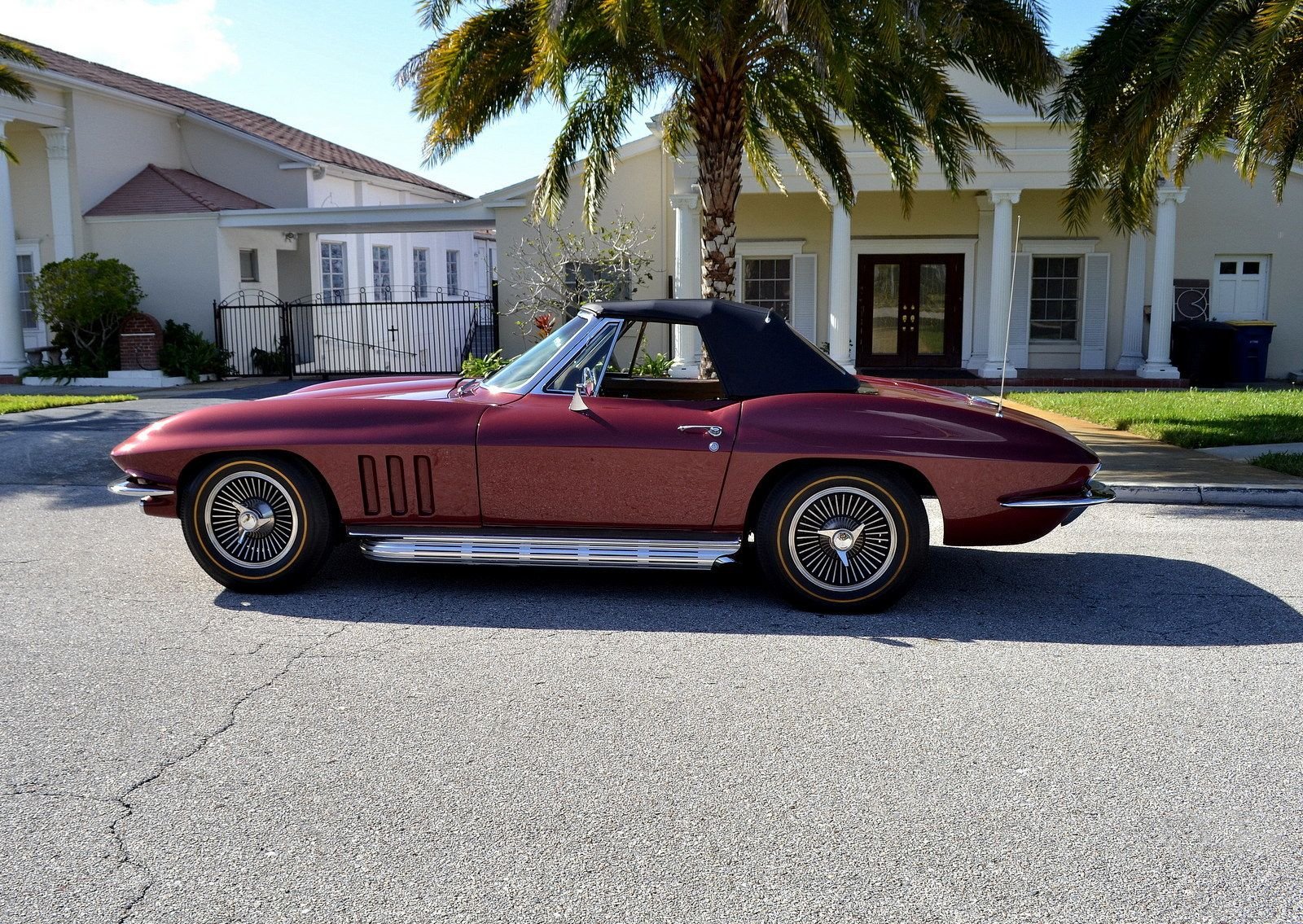 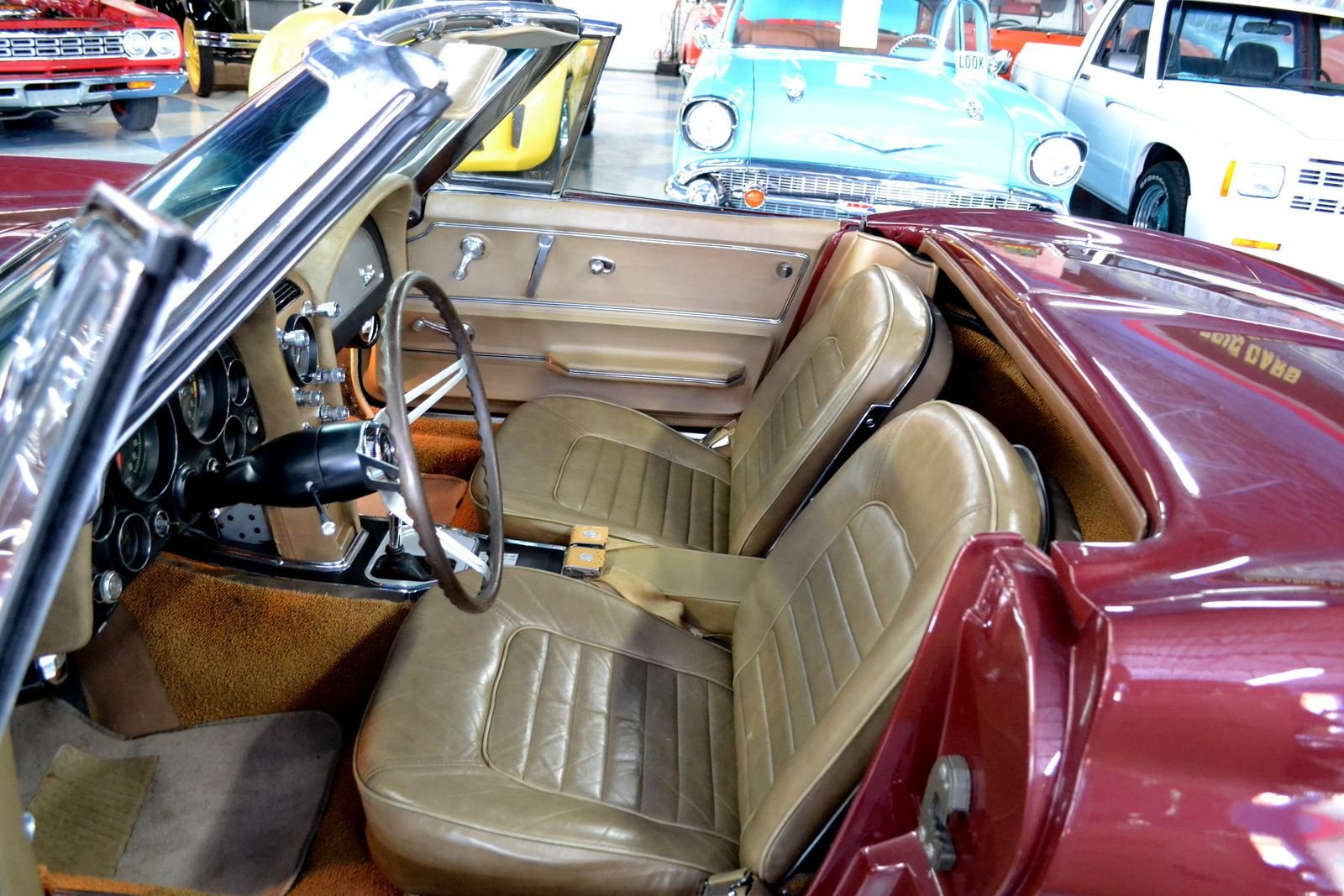 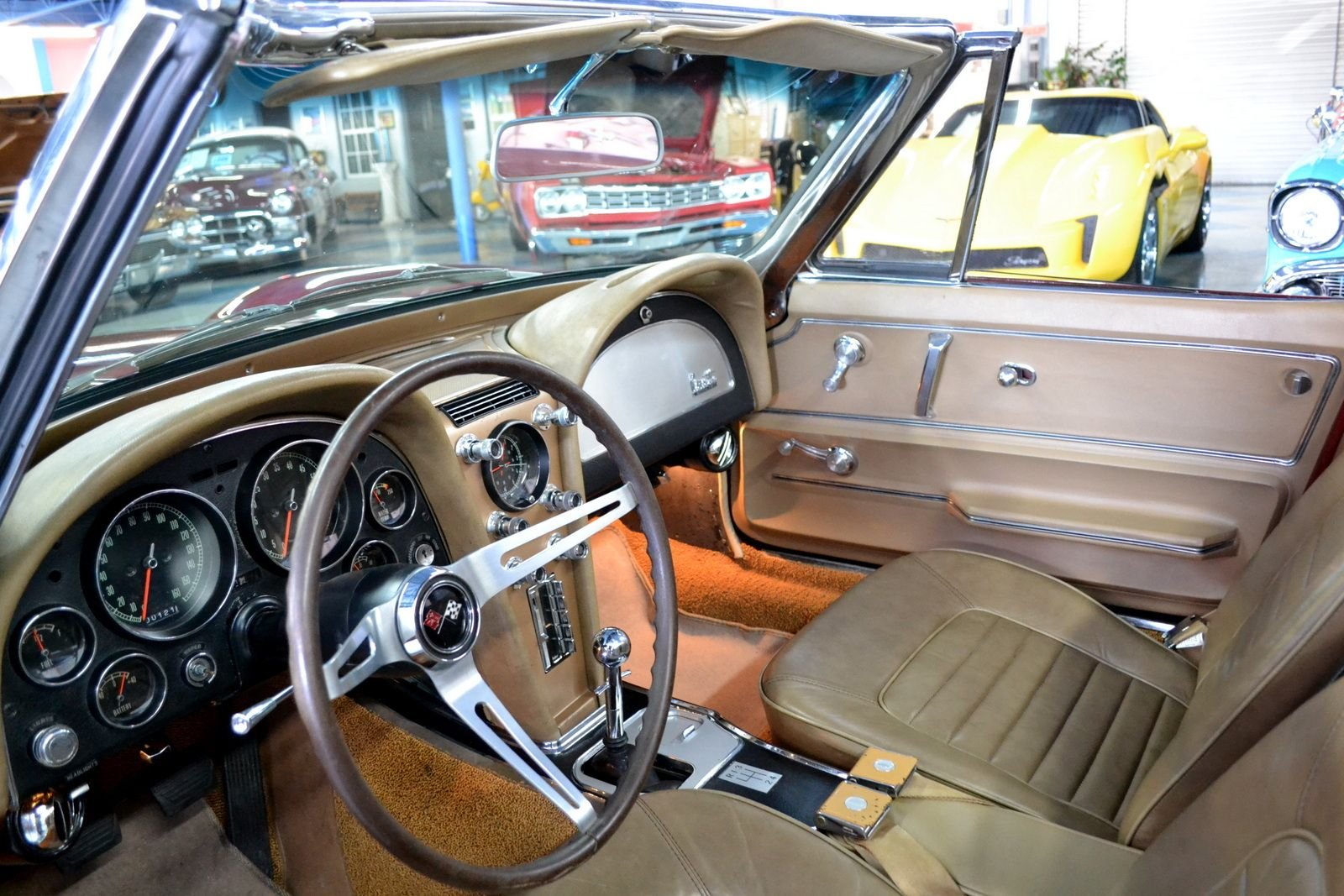 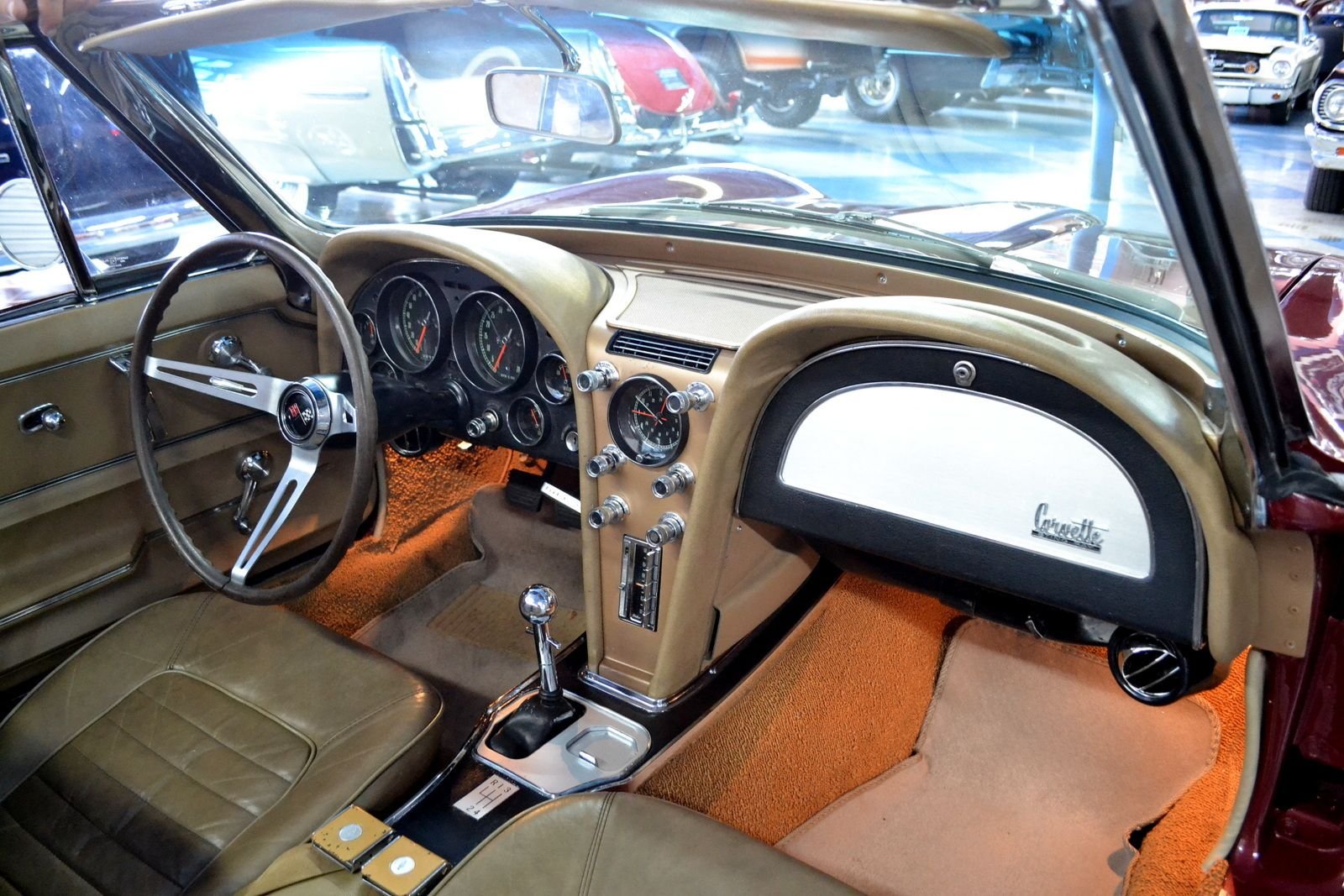 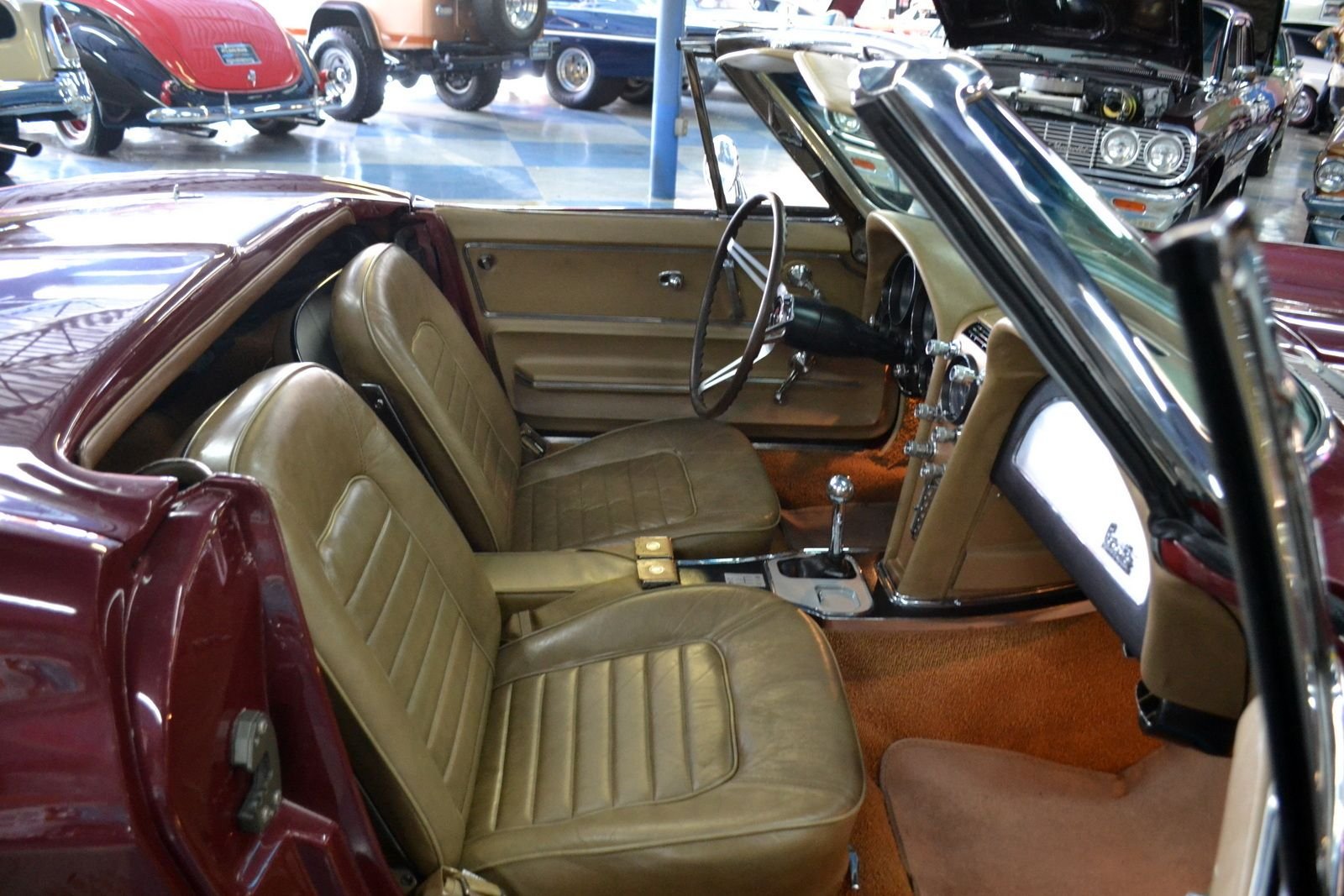 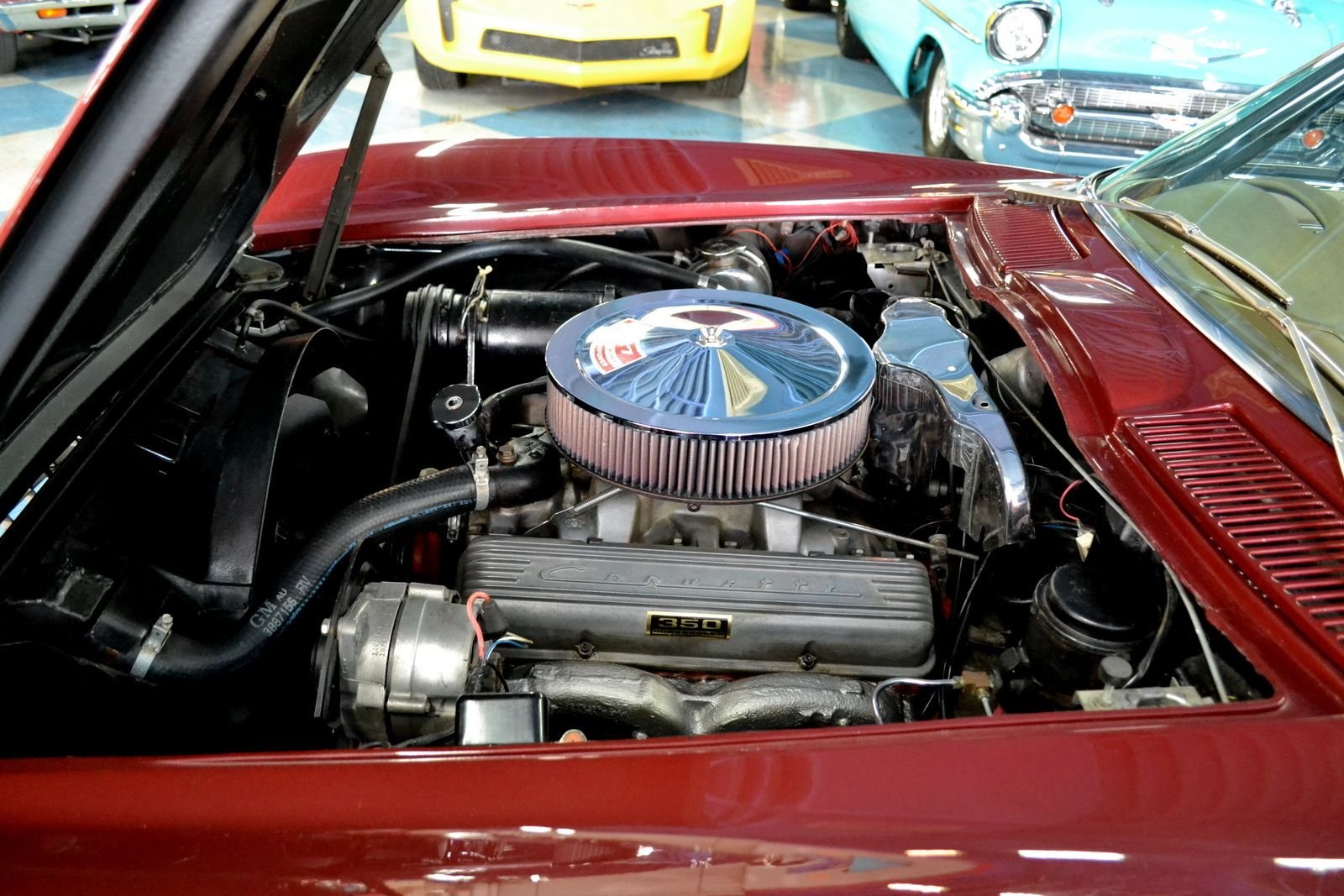 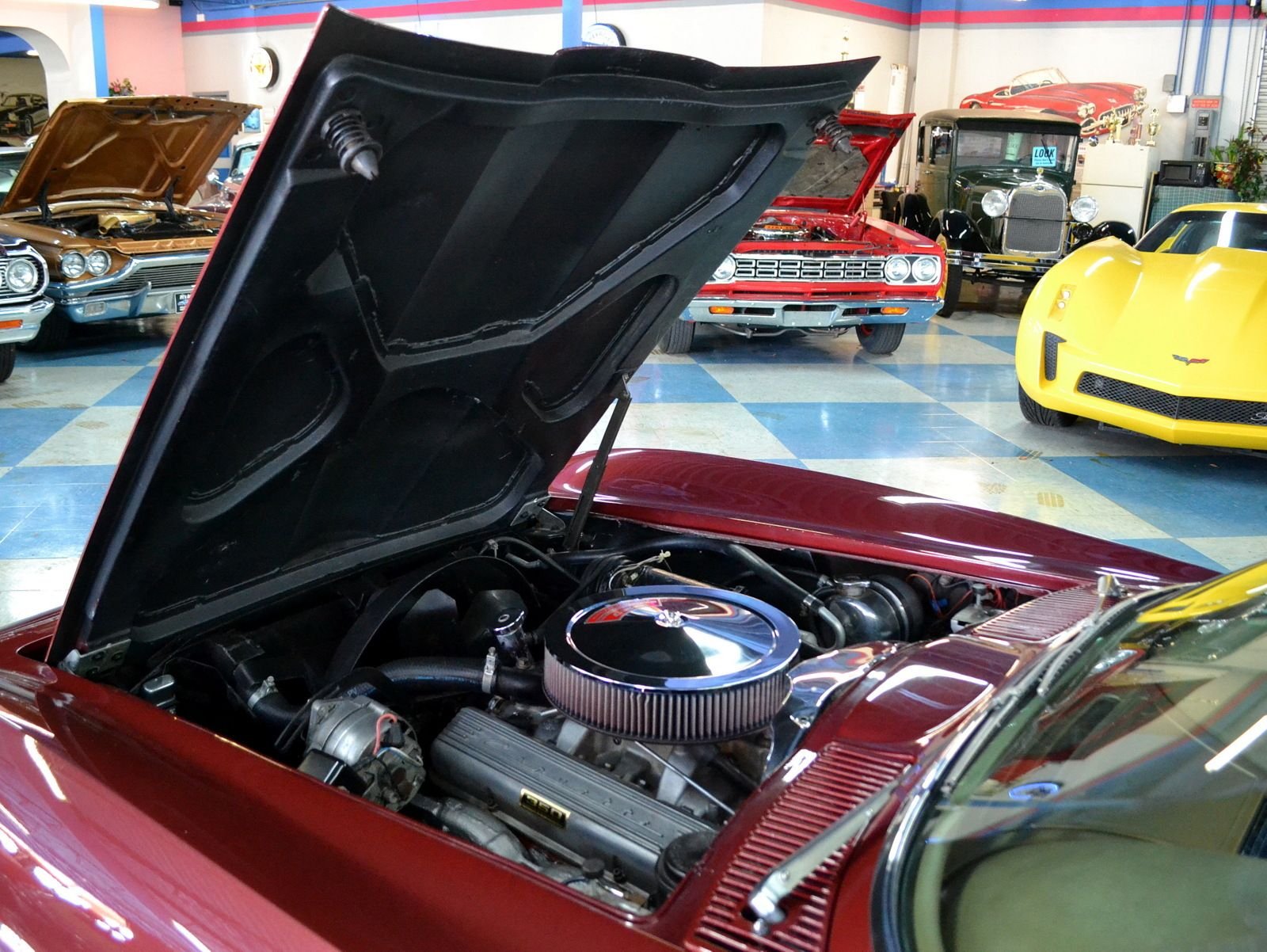 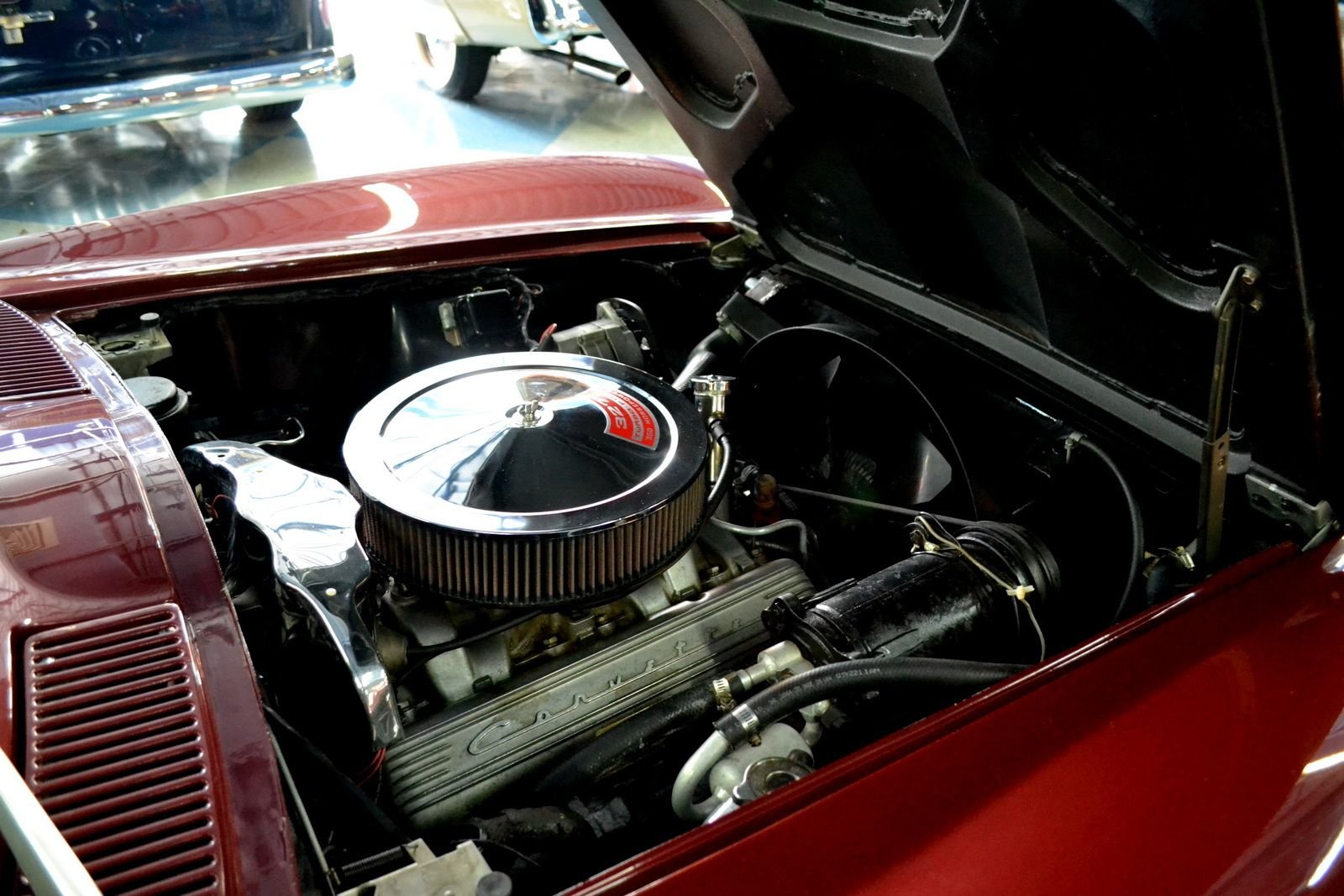 1966 Chevrolet
Corvette Roadster
$58,900 From $676 / month
1966 Chevrolet Corvette for Sale. 327 cubic inch V8 engine, aluminum intake, road exhaust, 4 speed manual transmission, power steering, 4 wheel disc brakes, factory A/C car, 15” knockoff wheels with BF Goodrich Silvertown gold stripe tires, Milano Maroon exterior, black convertible top, Saddle bucket seat interior, factory style shifter, AM radio. The Mid-Year Corvettes are undeniably the most exciting Corvette ever built, and this beautiful example is ready for fun! Mid Year Corvette History: The 1963 Sting Ray production car's lineage can be traced to two separate GM projects: the Q-Corvette, and perhaps more directly, Mitchell's racing Sting Ray. The Q-Corvette, initiated in 1957, envisioned a smaller, more advanced Corvette as a coupe-only model, boasting a rear transaxle, independent rear suspension, and four-wheel disc brakes, with the rear brakes mounted inboard. Exterior styling was purposeful, with peaked fenders, a long nose, and a short, bobbed tail. Meanwhile, Zora Arkus-Duntov and other GM engineers had become fascinated with mid and rear-engine designs. It was during the Corvair's development that Duntov took the mid/rear-engine layout to its limits in the CERV I concept. The Chevrolet Experimental Research Vehicle was a lightweight, open-wheel single-seat racer. A rear-engined Corvette was briefly considered during 1958–60, progressing as far as a full-scale mock-up designed around the Corvair's entire rear-mounted power package, including its complicated air-cooled flat-six as an alternative to the Corvette's usual water-cooled V-8. By the fall of 1959, elements of the Q-Corvette and the Sting Ray Special racer would be incorporated into experimental project XP-720, which was the design program that led directly to the production 1963 Corvette Sting Ray. The XP-720 sought to deliver improved passenger accommodation, more luggage space, and superior ride and handling over previous Corvettes. While Duntov was developing an innovative new chassis for the 1963 Corvette, designers were adapting and refining the basic look of the racing Sting Ray for the production model. A fully functional space buck (a wooden mock-up created to work out interior dimensions) was completed by early 1960, production coupe styling was locked up for the most part by April, and the interior, instrument panel included was in place by November. Only in the fall of 1960 did the designers turn their creative attention to a new version of the traditional Corvette convertible and, still later, its detachable hardtop. For the first time in the Corvette's history, wind tunnel testing helped refine the final shape, as did practical matters like interior space, windshield curvatures, and tooling limitations. Both body styles were extensively evaluated as production-ready 3/8-scale models at the Caltech wind tunnel.